Back to Teachers Page 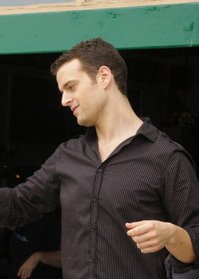 Having first stepped foot on the dance floor at the age of six, Paul has never looked back.  Ballroom and Latin was his first love. Starting off in the Junior leagues he competed in local comps in and around his home in the North West of England. Moving up through the ranks he continued to train and compete up until his High School days.   Despite a break to concentrate on his studies Paul picked up Ballroom and Latin again soon after and, armed with a new partner, travelled the country for training and competitions. Having been taught by some of the most famous names in the Ballroom world Paul went on to great competitive success - the highlight of this coming at the All England Modern Open (10 dance) in Yorkshire in the early noughties where he picked up a divisional first place.  Shortly after this success Paul's attention turned to the social dances. Having qualified as a Modern Jive teacher Paul went on to teach countless classes, workshops and events up and down the UK for over 6 years. Together with Mel he still teaches his own smooth version of Modern Jive to this day.

While working in the U.S.A in 2004 Paul encountered a little known dance called West Coast Swing. From that point he was hooked. West Coast Swing quickly took over his life and saw Paul training, competing and eventually teaching both throughout the UK and overseas. Competition success in the U.S was quickly followed up in the UK with his own classes and unique workshops, not to mention a tireless effort to spread the word of West Coast Swing. With over 6 years of teaching experience in WCS, Paul is one of the most experienced UK teachers on the scene. His widely acclaimed method of teaching demystifies the dance making it fun and achievable for all.  Paul's teaching is renowned for it's light-hearted, enthusiastic and relaxed nature. It is sure to raise a smile and help to make dancing exactly what it should be - fun.  Whether you're laughing at him or with him, he doesn't mind!